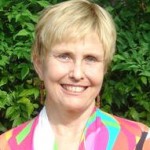 Scobie grew up in Bloomington, Indiana, and moved to Denton, Texas, with her four children in 1982 to teach American history in the Department of History and Government at Texas Woman’s University.  After a career of publishing and teaching, she retired early from TWU in 2000 to investigate new life directions.

She had begun watercolor painting classes in the mid-1990s; after retiring she began taking drawing, design, and painting courses in the College of Visual Arts and Design, University of North Texas.  She received a BA in art, specializing in watercolor painting, in 2005.  Active in the Visual Arts Society of Texas, based in Denton, she served as Executive Director from 2003-2007.

Over the last twelve years, Scobie’s award-winning work has been in many juried exhibitions.  She has had ten one-woman shows in various Texas locations, including three in 2008-2009, as well as work in numerous group exhibitions.

She is currently an MFA candidate in the Fiber Program at UNT with a secondary field in watercolor.